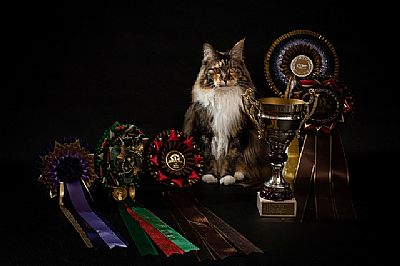 This was only Lucy Lou's second visit to the Supreme, having gained her first certificate during her visit last year. Naturally Fiona was absolutely delighted - she said

"What a fantastic day when Lucy Lou gained her UK Gr Title at the GCCF Supreme Cat Show – I was so happy!!!   Thanks must go to Judge Joyce Higgins (2012) and Judge Elaine Culf (2011); also, a very big thank you to breeder Margaret Wright from Powerkatz for this wonderful girl – we’re so proud of her."